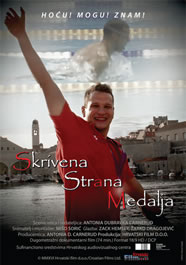 Today - with 26 medals won at world and European championships, as well as the Paralympics – Mike is the most decorated athlete in the history of Croatia.

This is, first and foremost, his story – from his early childhood to the present day where he shares his thoughts and his past, but also his concerns about daily life, politics, sports, family and other values in which he belives. Besides, what does it actually mean to abandon a successful career, from being a  celebrated athlete to becoming an almost anonymous disabled person overnight?

Apart from Mike and his closest family members and coach Dean, the film also presents Mirjana, a psychologist whose life, similar to Mike’s, was marked by polio and Ana, who is a multiple World and European Champion and the first Croatian top athlete with disabilities.

Different kinds of landscapes – the calmness of the sea, the beauty of the mountains and vistas of Mike's native city of Dubrovnik, gives us the opportunity to distance ourselves from the stressful training regimens and introduces a calm state of mind which a true sportsman needs to have in order to deliver results.

In this way Mike’s story, in which he, as well as people surrounding him share his views, his attitudes, his emotions, becomes universal and inspires each and every one of us to take a long hard look at ourselves, reassess our views, our priorities and introduce us into the world that at this very moment might seem so distant but can become our harsh reality in a heartbeat.

“Beyond Medals” shows a very personal destiny and story of growing up and maturing in a way that every viewer can identify and experience as his own.